Only from the water and only through returning from a trip where one may have been lost, one can see how big Qaanaaq is! 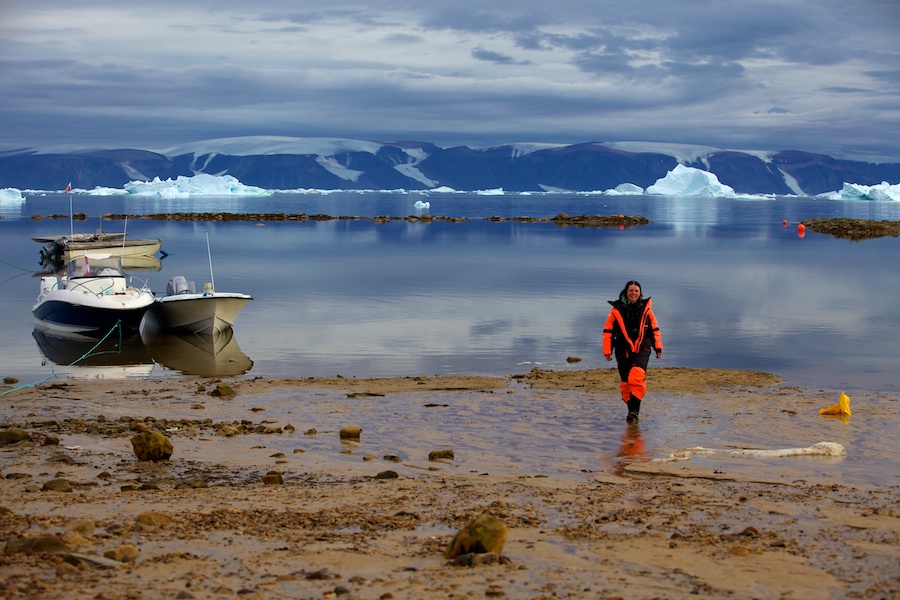 Qaanaaq is a truly metropolitan place, but unlike other big places that are self-absorbent, even narcissistic, and therefore looking inward, Qaanaaq looks outward. Every single window in Qaanaaq is a fortified observation post well equipped with tripods, binoculars and other surveillance gadgets. 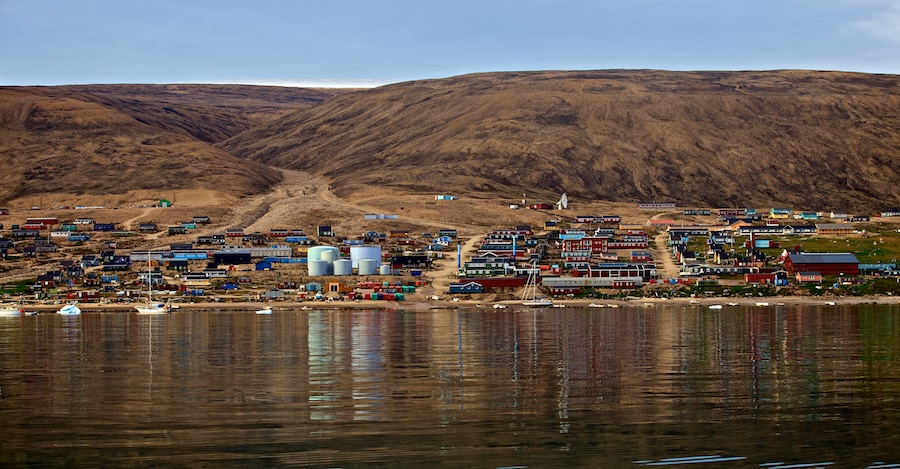 So, even though Qaanaaq’s “Broadway” may seem to be completely empty at this time of a night, we know that we have been already noticed  by our friends and soon they will show up to give us a warm welcome  back. 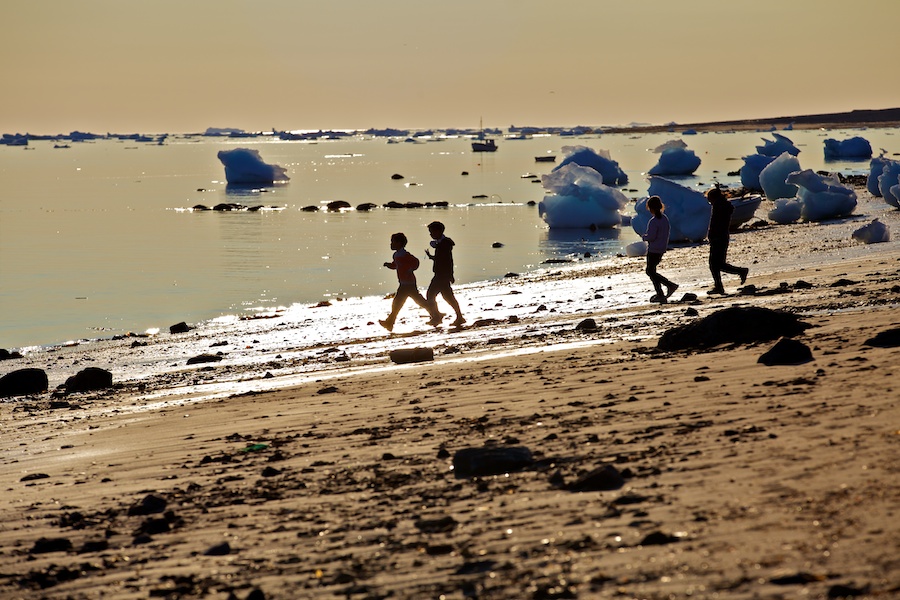 Our return from Neqip Akia has been brutal. It might have been the toughest part of our journey so far. We spent another night on turbulent sea, the third one out of five. When one is squeezed into a narrow open boat that happens to be narrower than most beds in the tiniest of the Manhattan studios, even one hour seems to be an eternity. You can’t really move at all – you stay motionless and you sometimes freeze to death. 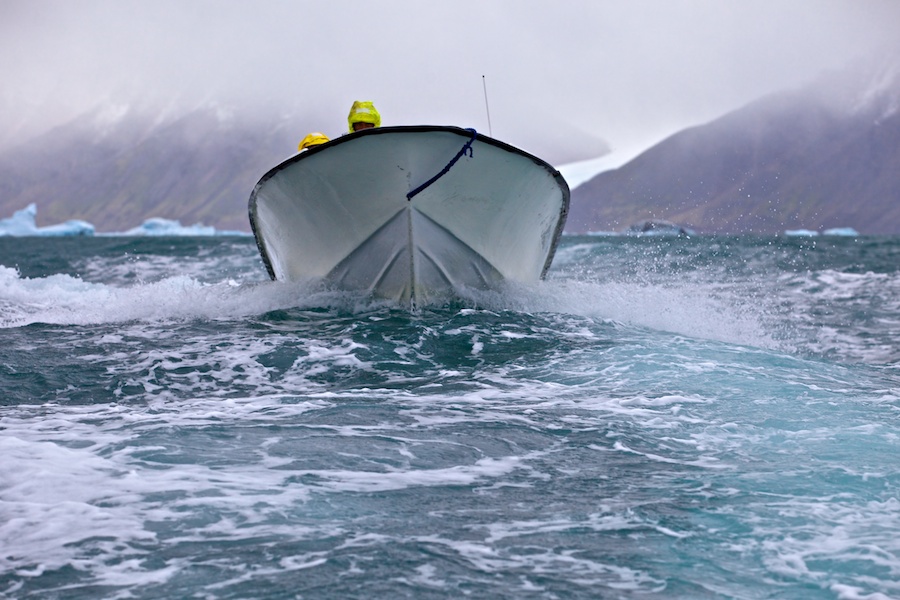 Hunger, cold, a leaking boat and a growing confusion took a toll even on Aalibarti – usually the unbreakable one. He spent all five nights at sea and had to be alert all the time – day and night. He was able to save both boats, but now it seems that he is simply burnt out. 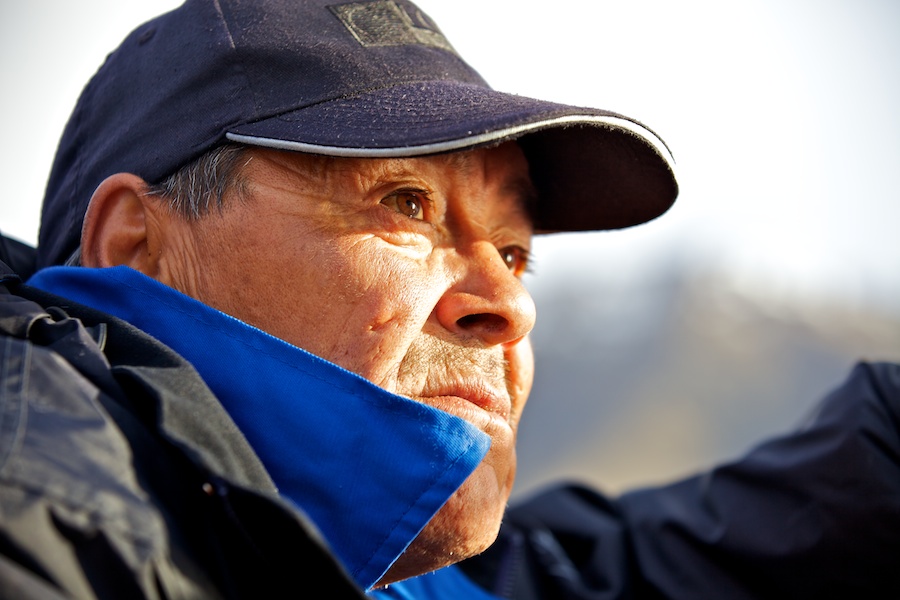 Constant thirst may have added up to that. The “water” we collected and drank in these days has been really “heavy”. Comprised of sand, stones and rare metals – maybe exactly the ones that are being extensively searched for in Greenland by international consortiums, and mixed with the arctic birds’ excrements that nurture the beautiful green lichen fields that make this part of Greenland really green, but that are too loaded  with metals such as cadmium and mercury, aluminum and zinc,  this “power drink” has been filling our systems to the top for the last 5 days. 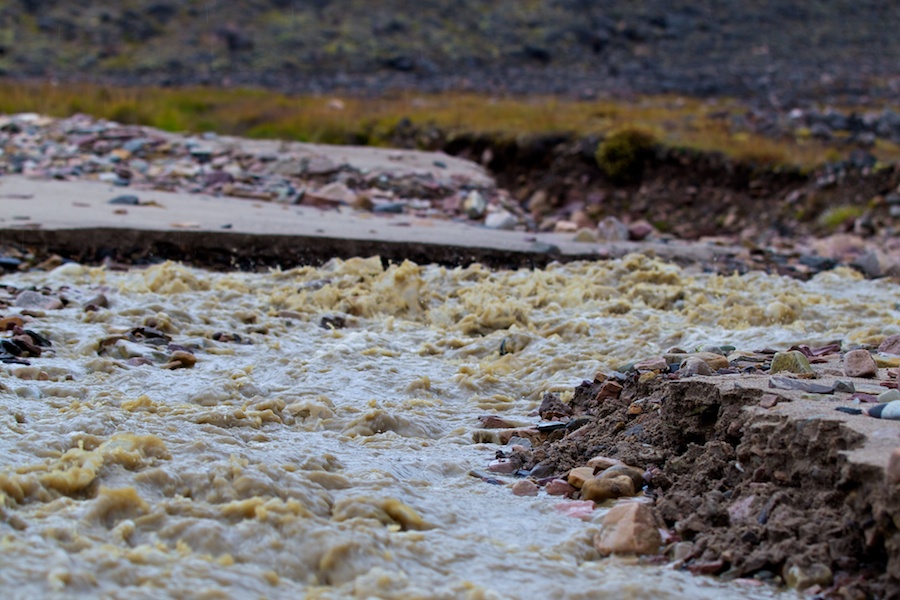 I am taking samples with me and am anxious to run the tests to find out what exactly we consumed during these 6 days at sea in Neqip Akia – a place that  seems to be so far away from pollution by industrial and agricultural contaminants such as mercury, PCBs and DDT. 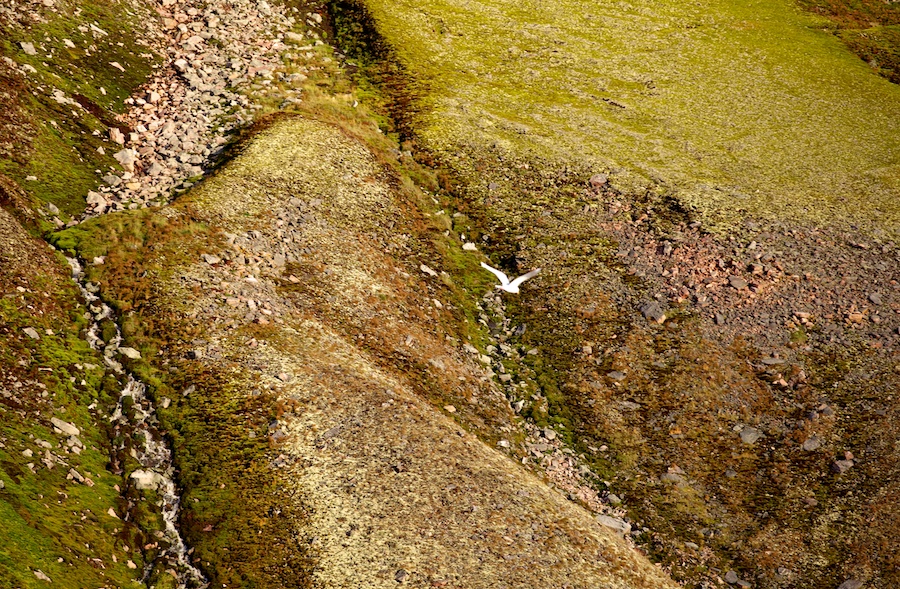 At 10 pm the wind was still raising, but – miraculously, the barometer was rising too. This gave us a slight hope that we could sneak into a narrow corridor of a fair weather opening to make a safe return trip to Qaanaaq. 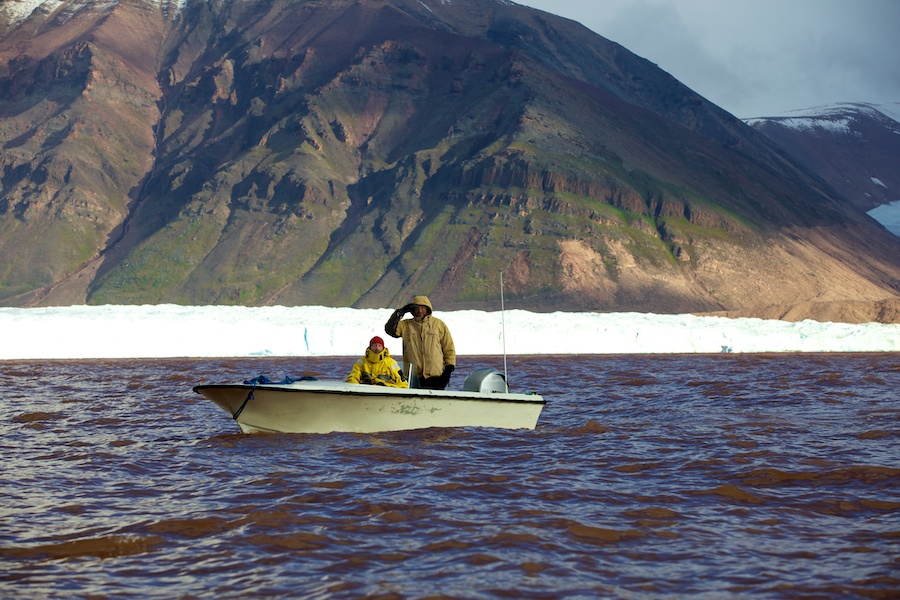 We started at 2 am in the morning, the quietest hour at sea, and rushed south at full speed. 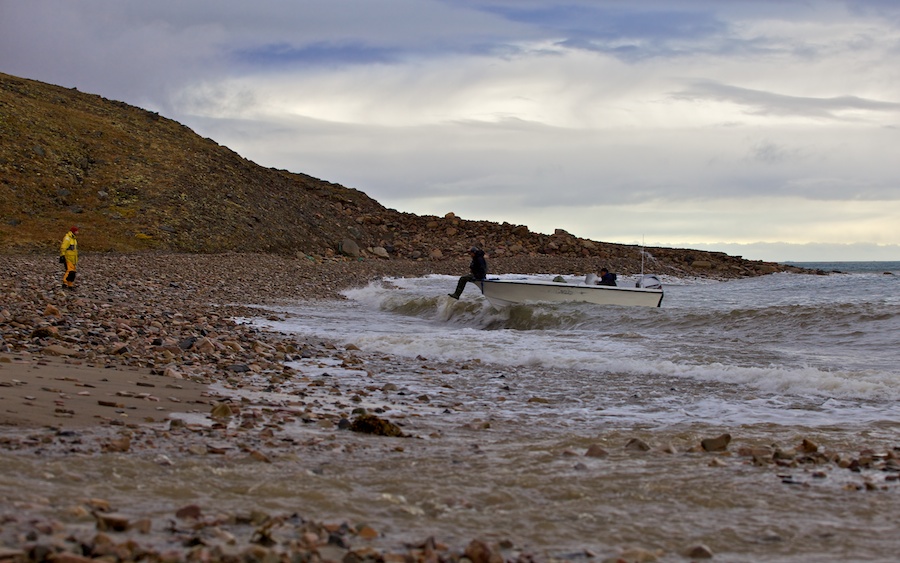 The waters of Neqip Akia Fjord were almost flat, but as soon as we turned  the corner,  we embraced a turbulent white capped sea and a cold south-east wind. 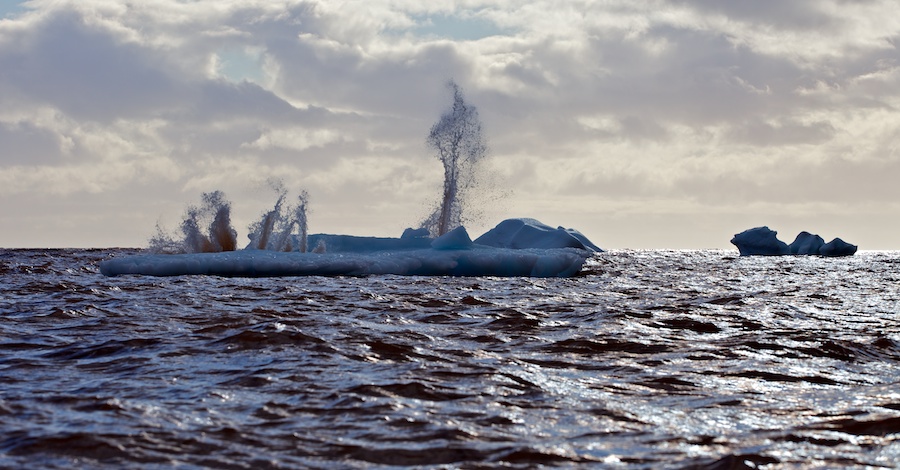 Now we are in the middle of the tormented sea again. And every quarter hour it increases its fury. The horizon is dark. Our small open boat seems to be too small and too open for these steep arousals and descents. My computer bag is now floating amidst the gasoline tanks along with other hard-wired essentials. No matter how often I use a “qallut” – a bailing scoop – the water is rapidly filling the boat. 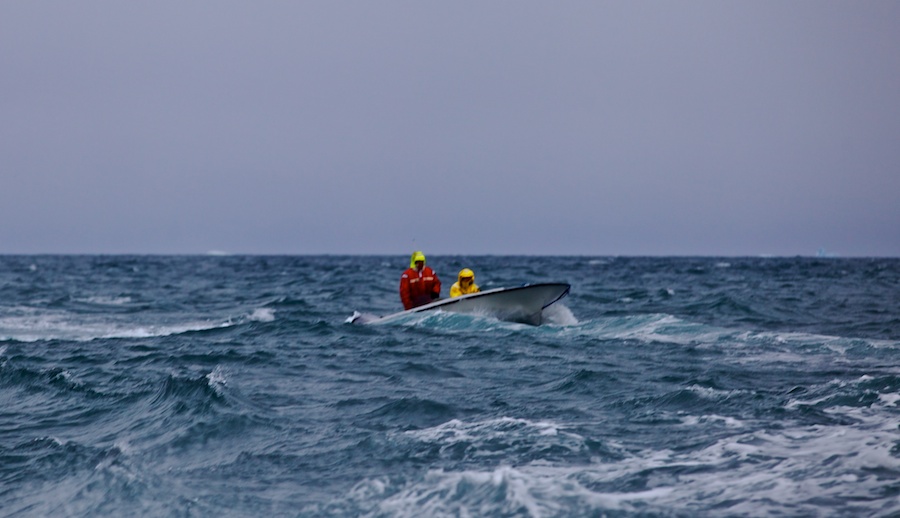 I am clinging to the rope as hard as I can but I still fly in the air and the heavy canisters with pink gasoline do too. Should we have stayed and waited for a better moment? We were again too impatient and too anxious ahead of time? 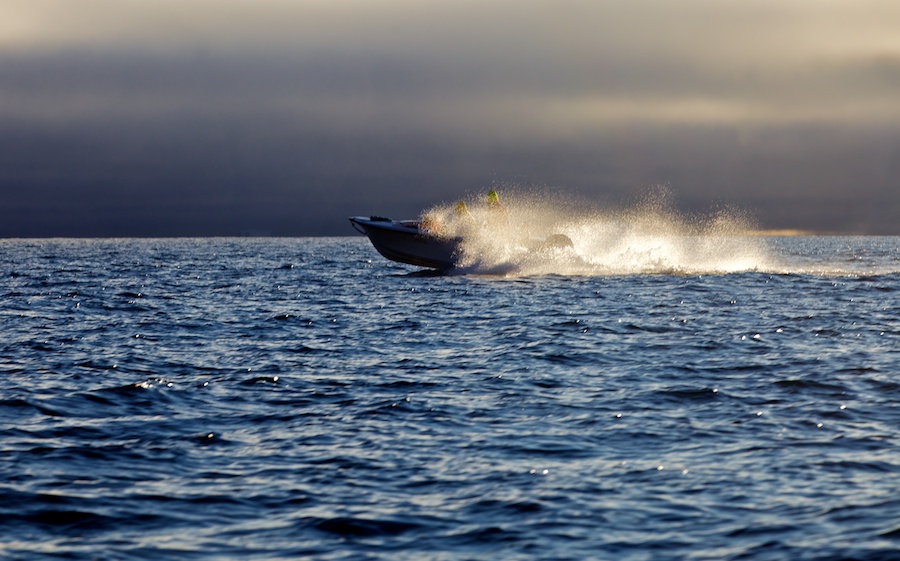 Our life in a small open boat is an enigma to many. “What can you possibly do there?” our friends from New York and London ask. “And why don’t you get a bigger boat? And why don’t you get efficient pumps? And a solid roof?”   But this is a “Greenlandic way”; we have what we have, we take what comes. We take our beating and try to adapt. 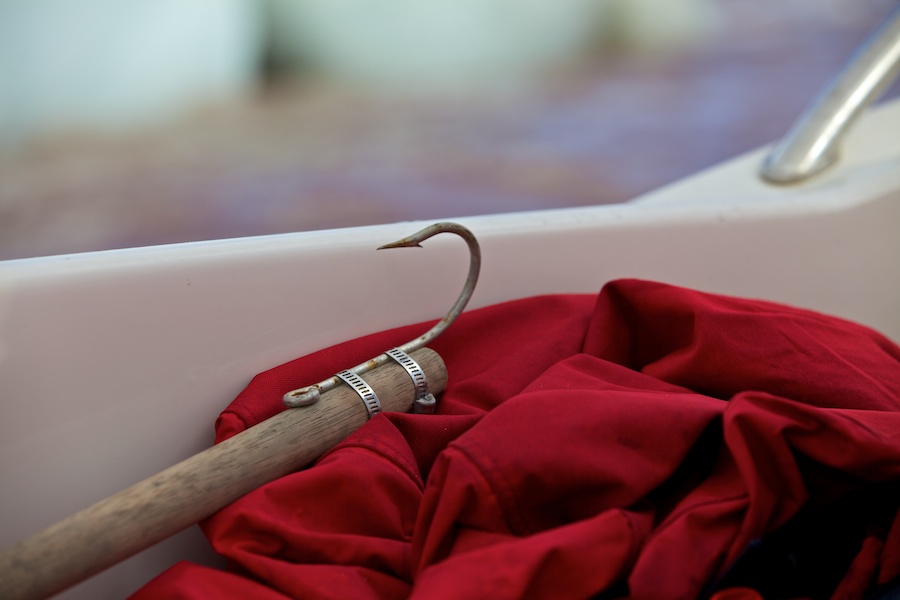 And yes, on some 4 square meters of space 80% of which is covered by canisters with gasoline, we are living on top of each other, the old communal style. There is no room for privacy.  Our “sleeping place” is on top of our “living room” that is in turn on top of our “kitchen” whilst the entire structure is partially submerged in the freezing water. But don’t people in Manhattan live the same way – on top of each other, like Arctic birds on the cliff?  They are happy about their life style, so why can’t we be?  Especially when we have this immense and unobstructed world in front of our “window” – a landscape in which the frontiers between myth and reality simply transcend. 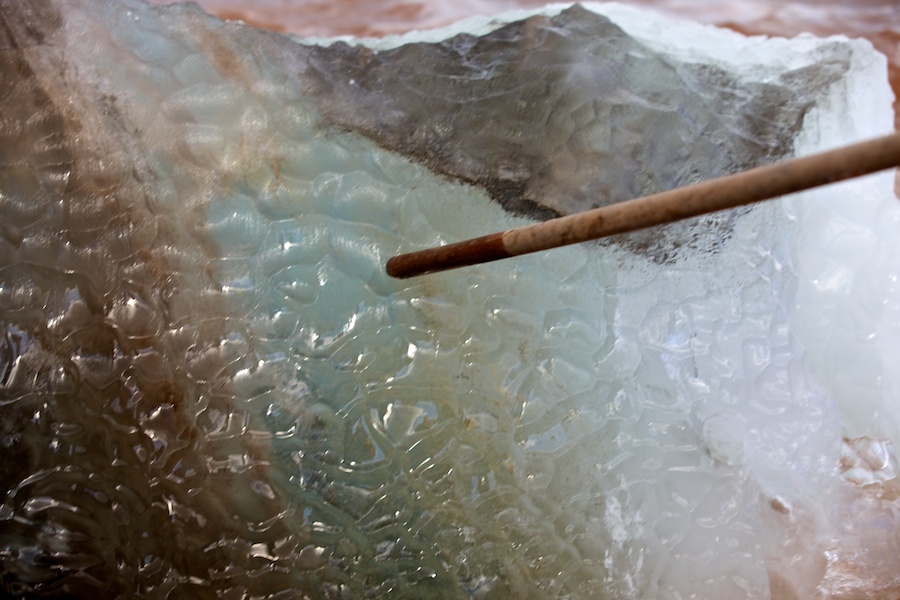 For some reason, I am constantly thinking of Uisaakassak, Sallutoorsuaq  - The Big Liar, one of the six Eskimos Robert Peary took with him in 1897 from Avannaa to New York for an exhibition at  the Museum of Natural History. Out of six, Minik and  Uisaakassak were the only ones to have survived. In 1898 Uisaakassak was able to return to his people in Uummannaq, Thule District. When he told his people about his experiences in Manhattan – about houses tall as  icebergs, about people living in the them like little auks on the cliffs, and about streetcars that could move without dogs, they called The Sallutoorsuaq, The Big Liar. An excellent hunter, Uisaakassak  had to flee Uummannaq and find a refuge at Uisaakassaap Nunaa, not far from Tuttulissuaq, now an uninhabited place. We passed it on our way from Kullorsuaq to Savissivik. 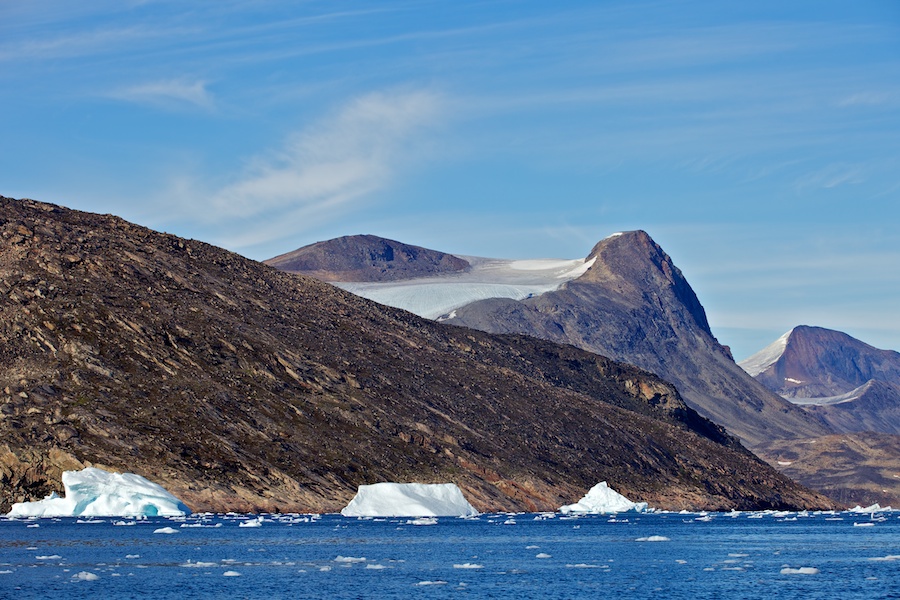 The spirit of Uisaakassak (which actually means “Restless”) who eventually had been killed by his fellow compatriots because he kept “lying” will never leave us.  It travels with us in the moments of storm and in the times of stillness. I think of him as the fifth one in our boat.  Expedition Avanna has many faces, and the face of Uisaakassak is definitely one of them. I guess, when we return to Uummannaq – if we return safely, some people will also call us The Big Liars too. Imaqa. 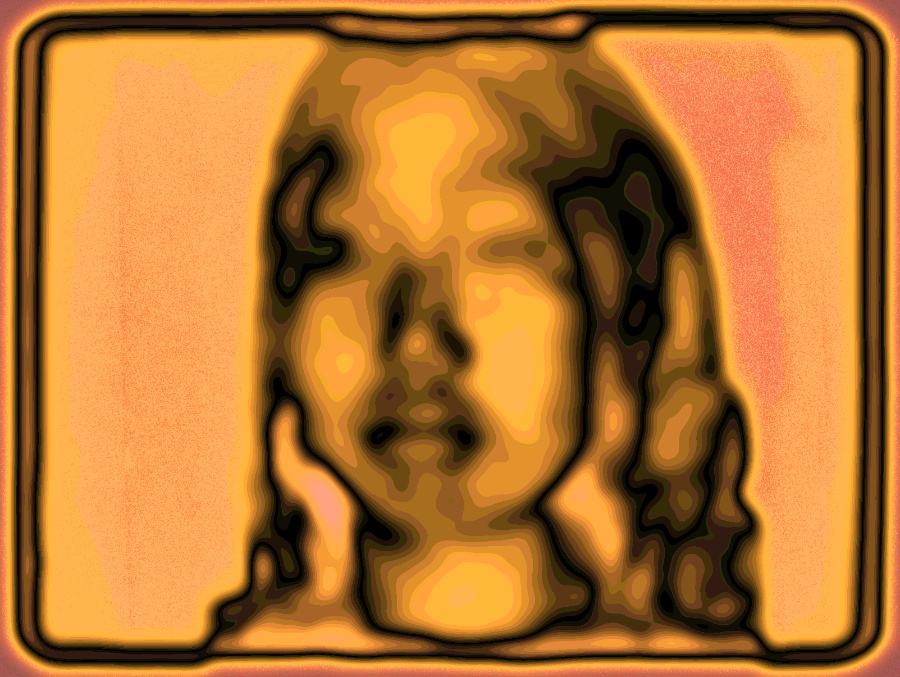 After so many misfortunes, we are lucky again. We are soaked to our bones, but that is nothing to the Inuit (=human beings) returning to Qaanaaq. 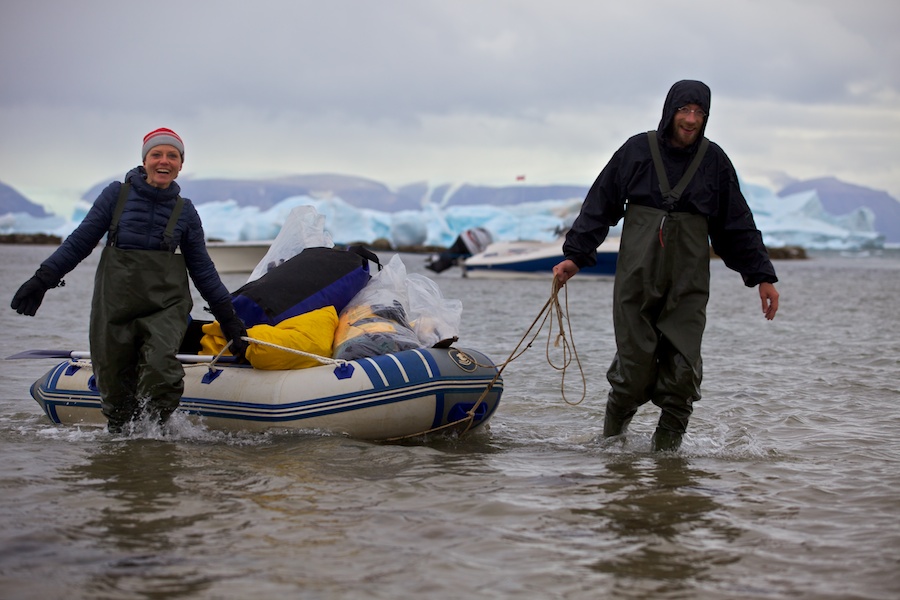 Landing in Qaanaaq employs a special procedure which may seem to some as almost theatrical. But for people living in Qaanaaq low and high tides are an everyday reality, so they see nothing special about it. 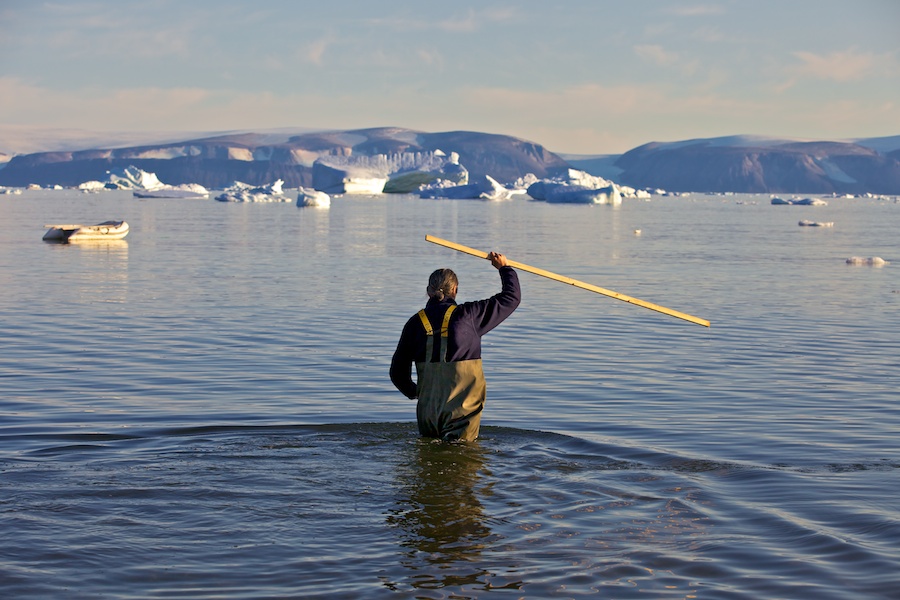 God is great. And mattaq is too. 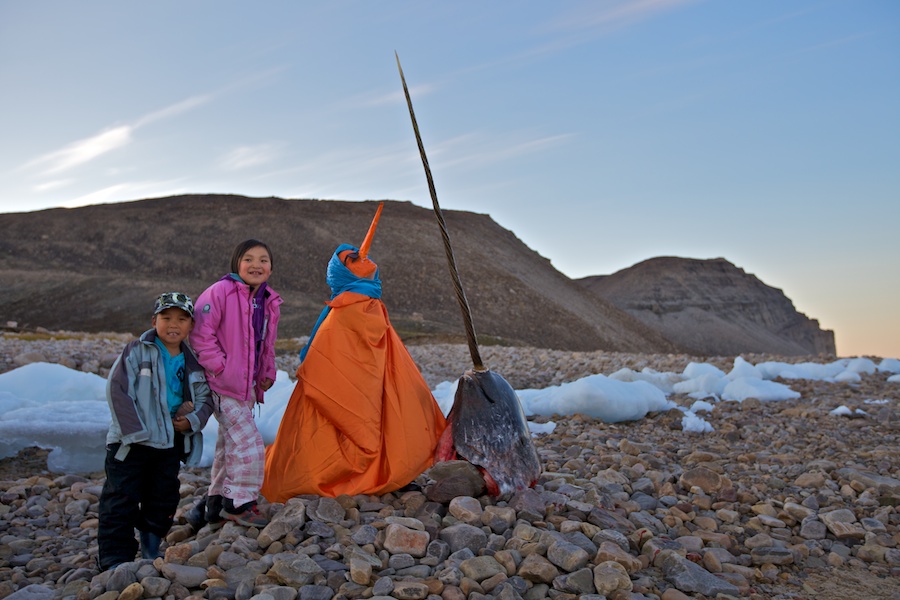 Clothes are washed and hung to dry. 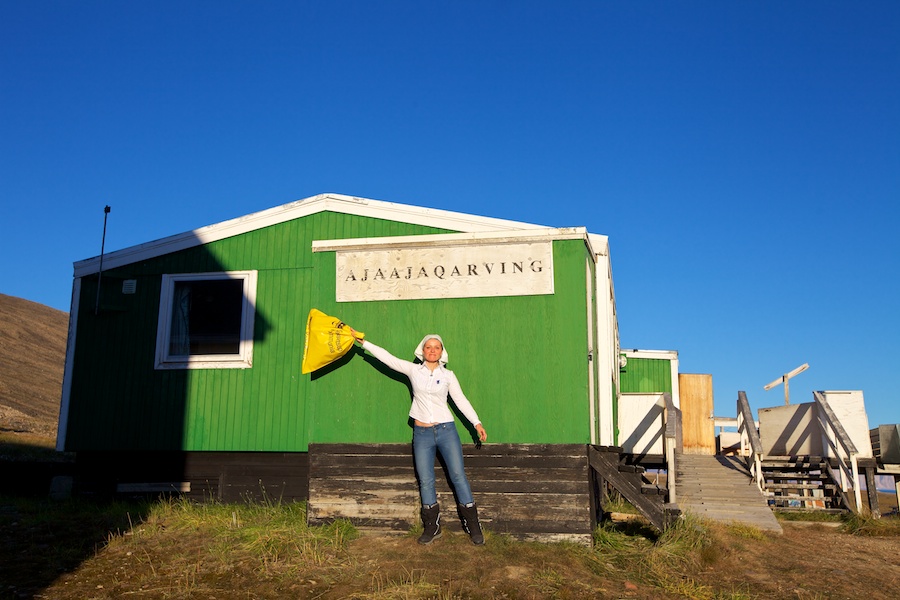 From our friends we have learned all the news we had missed in the days passed. We learned that a big storm had hit Qaanaaq. It tunred out that the weather had been bad for all not only for us. In Uummannaq for example a big tsunami caused by a collapse of a nearby iceberg caused a lot of damage and even moved the part of one house a few meters away. http://sermitsiaq.ag/node/133558 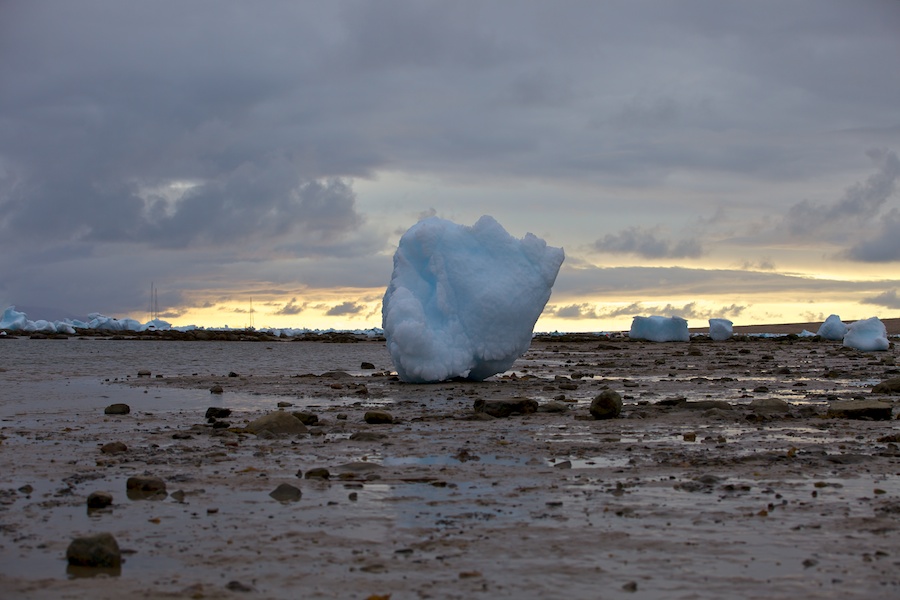 In the days of our journey from Qaanaaq to Neqip akia we lived through the moments of a great chaos but also of a great order – a higher order of nature.  Wind, waves, cold, and constant rain reminded us again about the fragility of a human body and the limits of a human mind. Our hands got swollen, and wounds on them got infected. At a certain point I had to open them with a knife and clean them with urine and blubber that  happens to be a natural antibiotic.  Our minds had been travelling on their own too, and it was not an easy journey either. 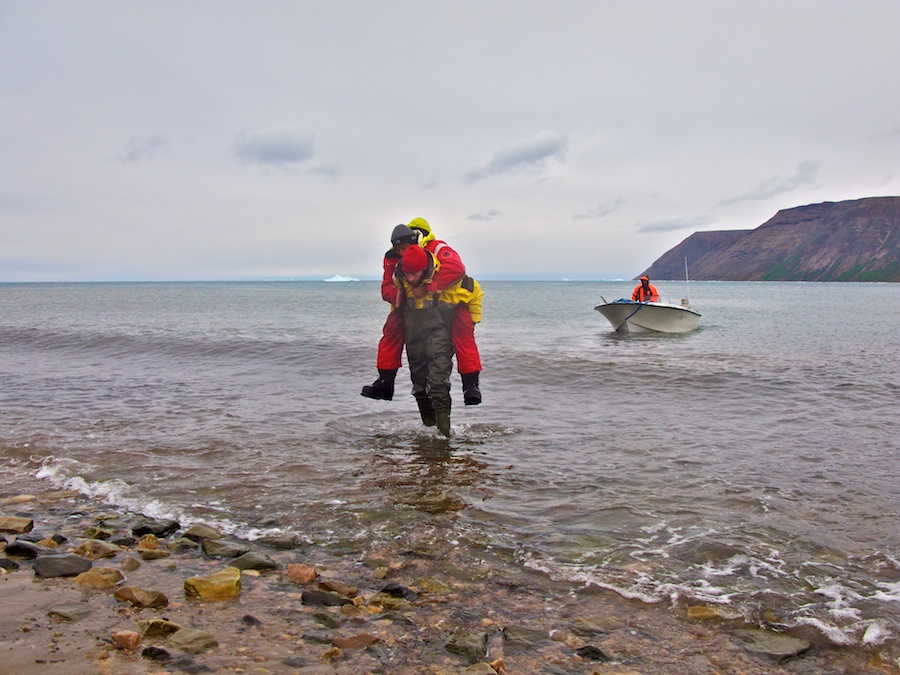 And now finally  to “lessons learned”. Did we learn anything if at all on the way North? I hope we did. Was our failed trip to Etah one of the saddest stories in the world? I hope it was not. What some people may call the drama of disillusionment, we simply call life.  In the last six days when our boat was sinking and when our hearts’ ligaments  were stretched to their breaking point, we felt that we were just paying a fair  price for the moments of living, for the moments  that no one can take away from us. 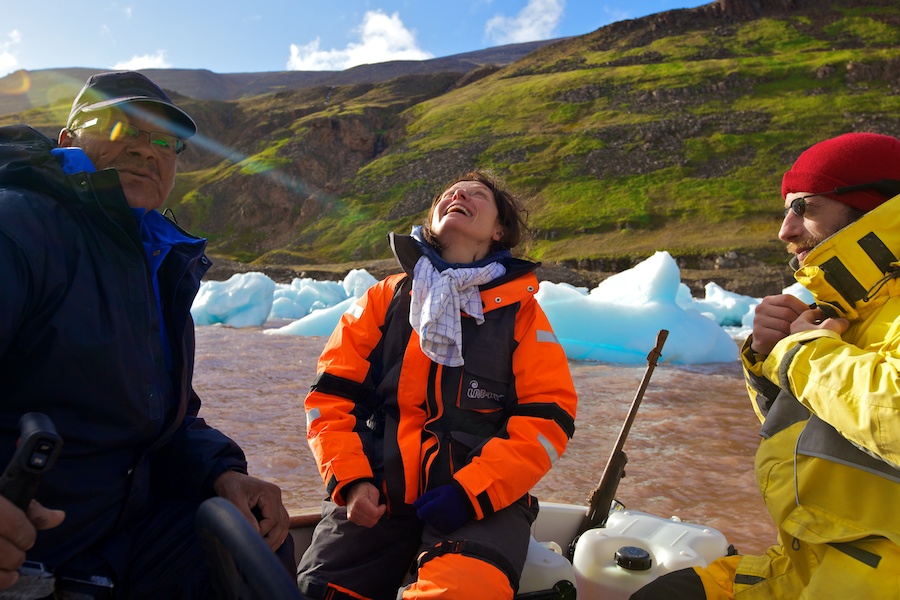 We live through these stolen moments of infinite beauty that does not exist in our everyday world. We live through them, and then all of a sudden our normal, routine world retreats, diminishes and finally disappears entirely, and the new, infinite world  takes its place. And we call it life!

Sometime after midnight, on the day of our arrival to Qaanaaq, the low midnight sun has finally broken through the clouds and illuminated everything around. And this was the moment we lived for. 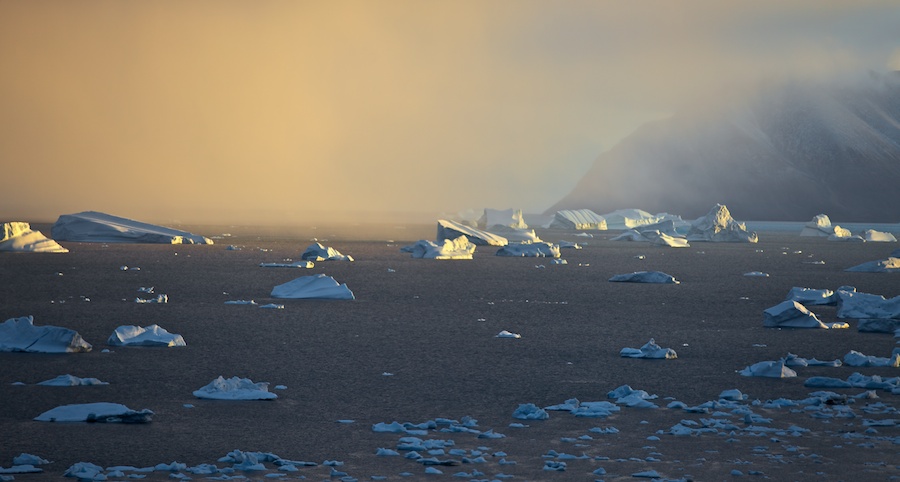